By LINSEY DAVIS and ERIC NOLL

This article originally found at: http://abcnews.go.com/WN/Media/black-women-marry-interracial-%20marriage-common/story?id=10830719 or click here for a copy of the original.

In 1967, the boundaries were still very black and white. The film "Guess Who's Coming to Dinner," about an interracial couple and their parents' angst, was considered groundbreaking.

Fast forward four decades and you don't have to look to the big screen to see interracial couples. You can see the beginnings of a melting pot everywhere -- just look at celebrity couples like Seal and Heidi Klum, or Tony Parker and Eva Longoria.

And new study by the Pew Research Center found that one in six new marriages in the U.S. are interracial relationships. That makes the United States one of the most colorblind countries when it comes to saying "I do," second only to Brazil.

"The surprising thing here is how much demographic and social change has occurred over a short time. Intermarriage was a taboo and illegal. That's a big change in a very small amount of time," said Paul Taylor, Executive Vice President of the Pew Research Center. Based on the latest census data, the study showed record highs: 26 percent of Hispanics, 31 percent of Asians, 16 percent of Blacks and nine percent of Whites all married outside their race.

"I think the racial barriers have almost, have blurred to the extent of almost being socially insignificant," said Professor Rick Banks of Stanford Law School.

Rates of interracial marriage among Asians and Hispanics remained steady, but there was a substantial change among black Americans, especially black men.

"We have a saying called 'the black girl curse,'" said Chato Waters, a single black woman. "A lot of our white friends are married by 25, happily married with kids by 27, and we're like, what's the deal with the 'bee gees' -- that's 'black girls.'" 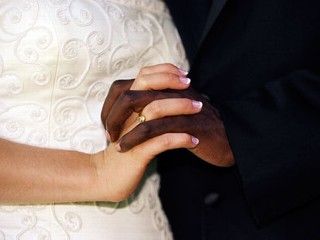 When ABC News spoke with one group of black women the consensus was that they want to get married, and their preference was to marry a black man. But the pool of eligible bachelors has dwindled. And even though these women are willing to marry men of other races, they told us their options are more limited.

"We are maybe not as coveted as black men in society. I just feel there is a lot of taboo that is associated with dating black women, 'cause I don't think they are necessarily ready to take us home to see momma," said Melinda Watson, a black woman who is single and looking for a husband.

The fine print may be complicated but the overall headline is that color lines are becoming more blurred.

The Associated Press contributed to this report.