Critical Review of an Announcement Found on Page 4 of Pete Peters’ Publication:

[My references in brackets refer to the notes which follow.   Click here to see a scanned image of Peters’ original document]

We only want Christians at this year’s gathering, i.e., those who are part of the body of Christ, i.e., the Church of Christ [see #1].

We become members of His body when we are baptized for the remission of sins (Acts 2:38) [see #3].

“For by one Spirit we were all baptized into one body ...”

Thus, we will begin the gathering on Friday, May 29 at 2:00 pm with some basic Bible teachings, and then will have a Baptism service on Friday afternoon. It will be better, more powerful and more Holy Spirit filled to have a gathering of Christians [see #5] (even if it is a lesser number) than to have a large crowd with snakes and those only wanting ‘entertainment’, including those ‘observers’, at this gathering.

We will serve Communion at this gathering to help weed out the snakes. [see #6] We gather in the Name of Jesus Christ, so those of you who are using that false, so-called ‘Hebrew’ name [see #7], which is nothing more than the name of another god, need not come [see #8].

All will be broadcast live on the Scriptures for America Worldwide Broadcasting Network (www.SFAWBN.com). Saturday night we will broadcast live our 2-hour Country Gospel Opry Program. It will be a great time. (NOTICE to our Acres of Diamonds Men -- Let us know now what lessons you would like to present.)

The gathering will be at the Cobblestone Inn, 275 Tanger Blvd, Branson, MO, starting Friday May 29th at 2:00 pm. Their phone # for room reservations is 417-336-2152, and they are giving us a great room rate of only $45.99 per night, and that includes a continental breakfast! Call and reserve your room now while they are still available!

Critical Notes By Clifton A. Emahiser:

Note [#2]: Peters is evidently quoting from the KJV, but he has not quoted it exactly word for word. I do that myself, especially where the Holy Name of Yahweh appears. If I make such an insertion, I usually state that I have amplified it for a better understanding.

Note [#4]: By quoting 1 Corinthians 12:13, Pete Peters is admitting that in New Testament times one is baptized by the spirit, not by water. If one will study Acts 2:1-37, real closely one will find that on the day of Pentecost that those in attendance received the Baptism of the Holy Spirit first before verse 38 where Peter suggested water baptism. Pete Peters’ criteria is the just reverse of this demanding that one first be baptized in order to be qualified to receive the Holy Spirit. Pete Peters also demands that one be water baptized in the corrupted name of “Jesus” or such baptism is of no avail. Evidently Pete Peters is not aware that Yahshua had the same name as Joshua in the Old Testament. The only problem with the name of Joshua is the fact that the letter “J” wasn’t added to the alphabet until the 17 century A.D.! Therefore, the name of Joshua must be articulated with a “Y” sound. There are many Old Testament names that were corrupted when translation was made from the Hebrew onto Greek because the Greek language was difficult to transliterate properly. Examples: Hosea became “Osee” and Jeremiah became “Jeremy”. For the same reason Yahshua became “Jesus”. See William Finck’s Yahshua To Jesus: Evolution of a Name.

Note [#5]: What Pete Peters is intimating here is that anyone who uses the Holy Name of Yahweh or Yahshua need not come to his meeting at the Cobblestone Inn, 275 Tanger Blvd, Branson, MO, starting Friday May 29th at 2:00 P/M., or any other meeting by him in the future! He even goes so far as to claim that anyone who uses the name of Yahweh or Yahshua is not a Christian! But the truth of the matter is, he used the name of Yahweh himself when he introduced and endorsed the black singer at a sermon on March 16, 2008. As you will see and hear from Pete Peter’s own mouth is that he said “halleljah” which articulates in the Hebrew as “praise be Yahweh”! That many of the songs have the expression of “halleljah” which are going to be sung at Peters’ meeting at Branson, MO should also be made known everyone! You can observe Peters voicing “hallelujah” about 1½  minutes into the excerpt of his presentation of a negro singer recorded at the link below. The negros’ name, address and telephone number are Charles Wilkins, 528 Darla Drive, Branson, MO, 65616, Tel. 417.593.3262. Peters also endorsed the black William J. Seymour of “Azusa Street Revival” fame of 1906. See and hear it for yourself at:

Note [#6]: When Pete Peters speaks about “snakes” or “serpents” some might think he is speaking about the Two Seedline doctrine of Genesis 3:15, but he is not! He still quotes the corrupted Genesis 4:1 when the subject is brought up to try to prove that Cain was the son of Adam! As can clearly be observed on page 4 of his The Dragon Slayer Newsletter, vol. 3, 2009, anyone who disagrees with “Pete Peters” is a “snake” or a “serpent”! These are the “snakes” that Peters wants to “weed out” of his meeting at Branson, MO, or any of his other meetings!

Note [#7]: In the early part of 2007, Pete Peters was on a tangent to disprove the name of Yahweh. He made the claim that he had paid around $150.00 for a book and that he said had solid evidence that the term “Yahweh” was pagan in origin. He stated that he was going to have a meeting where he was going to prove all of this, but I have never heard where he has presented any of his documentation! Knowing that Peters was on the rampage on all of this, I quickly put together an article of my own with an addendum by William Finck. I entitled this paper: Just Because The Term “YA” Was Found At Ebla & Ugarit Is No Sign That Yahweh Is Canaanite In Origin! I made this into a PDF file 5-23-07. Pete Peters is named therein.

Note [#8]: Here again Pete Peters states you “need not come” to his meeting! How many times must he repeat that you are not wanted? Personally, I wouldn’t go to one of his meetings if it were held directly across the street from my home!

Note [#9]: Judging from your past, Pete, are those singers you are going to have at Branson some more blacks? You know, Pete, you might as tell all of those children who are going to attend your children meeting at Branson to go out and marry a black and tell everybody that God sent the blacks to them for the purpose of marriage!

Some may claim that I should take all of this to Pete Peters and hash it all out before I put it on the Internet. My answer to that is I have already corresponded with Pete Peters on some of his nonsense and here are a couple of letters that I sent to him by the postal service:

In response to your July 13, 2006 letter to me, I would remind you that it was you who called me (not I you) about the Edomite copyist error which should have been Syrian instead. As for “baptism”, it is an Old Testament ritual which served its purpose for its time but was replaced with the baptism of the Holy Spirit. Though the disciples continued water baptism for a while after Pentecost, water baptism was gradually phased out until Paul made it clear that his commission was to preach the Gospel rather than to baptize.

As for “The Azusa Street Revival”, William J. Seymour was in it from day one. It was Charles F. Parham who paid William J. Seymour’s traveling expenses and a negress, Neeley Terry who urged Seymour to go to Los Angeles from Houston.

Pete, I am more aware of the origins of the Pentecostal and Charismatic movements than you may think. I have noticed, over the years, that usually it isn’t very long in a so-called “holiness” atmosphere, that the pastor is laying with some other man’s wife in the congregation! I know one man who did this, got a divorce from his first wife and remarried the woman he seduced, had children by the second wife, and a few years later needed a baby sitter to care for his children by this second wife and ended up getting the baby sitter pregnant. And this is not an isolated incident, as it goes on continually in the “name of the Spirit.” It seems that a “Pentecostal” can commit any sin, as long as he/she wags his/her tongue.

Pete, you have already committed your blunder on Azusa Street, and there is no way you can weasel out of it! That is, unless you repent 100% of any endorsement of the Azusa Street Revival to ALL of your parishioners. My biblical position is: If I know of a crime that is about to be committed, in the process of being committed, or has already been committed, and if I do not witness to that crime, I become part and parcel of that crime. Pete, your endorsement of the Azusa Street Revival is a crime, and I will write as many papers as necessary to witness to that crime.

P.S. Enclosed is a brochure written by myself entitled “Pete Peters Endorses Azusa Street Revival”. Enclosed also is a printout of a PDF file of the same article for E-mail and the Internet.

Inasmuch as you know everything there is to know about everything or anything, could you please explain to me why Paul said at 1 Corinthians 1:17:

“For Christ sent me not to baptize, but to preach the gospel: not with wisdom of words, lest the cross of Christ should be made of none effect.”

Are you greater and wiser than Paul, the chiefest among the Apostles? Or should we start following the nigger, William J. Seymour, the tongue-wagging, multicultural, antichrist, enosh leader of the famed Azusa Street Revival? 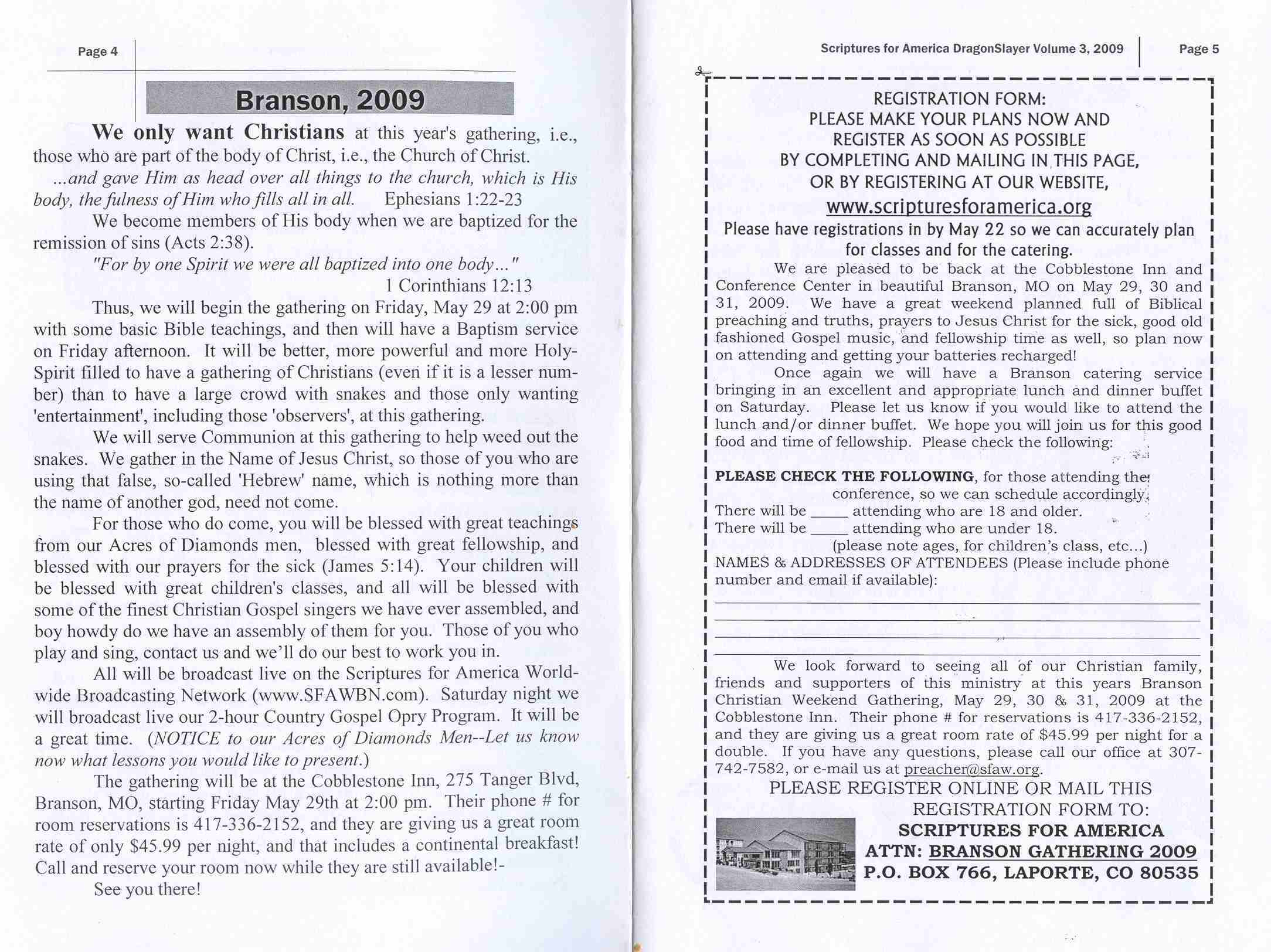