The following text is reproduced from page 97 of The Cambridge Bible for Schools and Colleges. The Books of Chronicles. A limited version of this book may be viewed freely at Google Books. Below we shall provide a facsimile of the page to which we refer. It presents I Chronicles chapter 18, verses 11 through 16, and has copious notes concerning various aspects of the translation. Here we are interested in the notes for verse 12, which explains the common confusion of the words Aram, or Aramaean, and Edom, or Edomite, which are very similar in Hebrew. Aram is usually translated as Syria in the King James and other versions, while Aramaean is usually Syrian.

protection in war. Cp. the action of Asa (I Kin. xv. 18, 19) and of Ahaz (2 Kin. Xvi. 7, 8). In all three cases the policy was the same, i.e. to acknowledge a distant suzerain in order to gain the benefit of a valuable alliance, while losing the minimum of independence.

12. Abishai the son of Zeruiah] In 2 Sam. Viii. 13, David, and in Ps. lx. (title) Joab, receives the credit of this victory. Probably Abishai commanded in the battle, while Joab (cp. I Kin. xi. 16) completed the conquest of the country.

the valley of salt) Probably the marshy flat (Bädeker, p. 144) at the S. end of the Dead Sea. This valley is dominated by the Jebel Usdum, a hill consisting “almost entirely of pure crystallised salt” (Bädeker, p. 143).

14. among all his people] R.V. unto all his people. David was his own chief justice, but probably the work was too much for one man; cp. 2 Sam. xv. 2-4 with Kirkpatrick's note.

Below is a facsimile of the page which we have reproduced in text here: 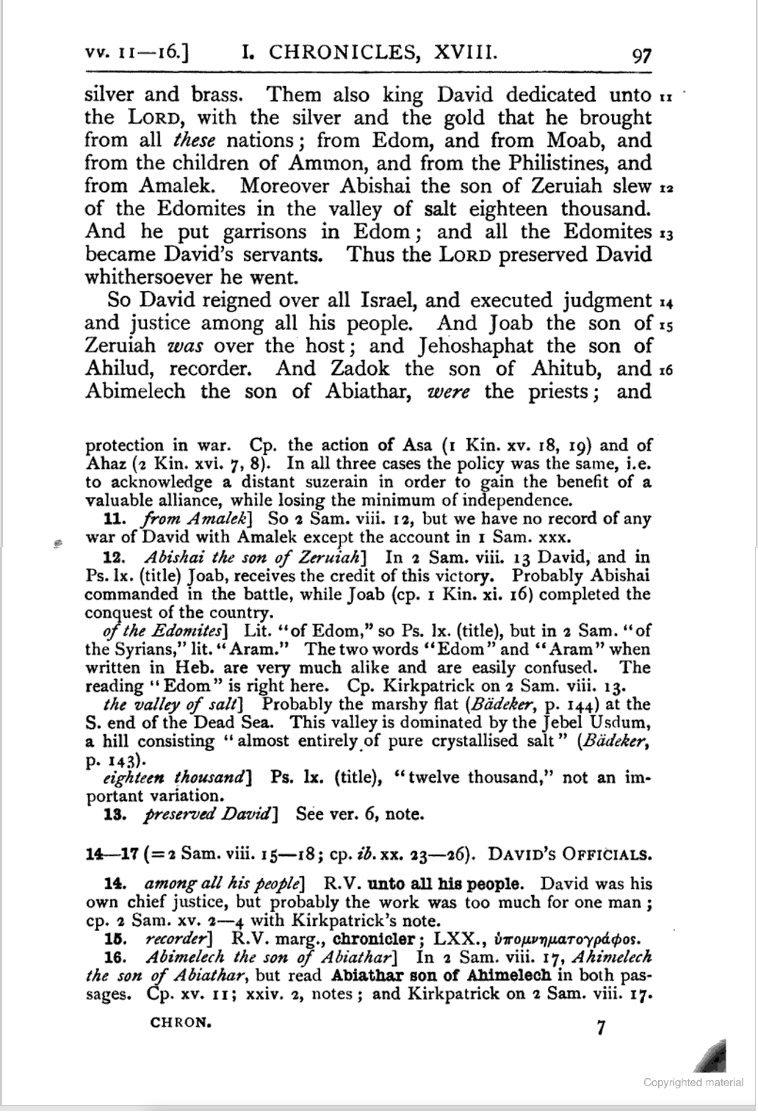