The cited verse above, from the KJV, reads: “And Adam knew Eve his wife; and she conceived, and bare Cain, and said, I have gotten a man from the Lord.” This verse seems to have been corrupted even before the Septuagint!

I will cite some of the oldest manuscripts we have access to in an attempt to restore the original meanings to some current errors. An important witness is the Hexapla, and I will cite the 1881, 15-volume Library of Universal Knowledge, vol. 7, p. 514:

“HEXAPLA (Gr. hexapla, ‘the sixfold’), a celebrated edition of the Septuagint version, compiled by Origen for the purpose of restoring the purity of its text, and bringing it into closer agreement with the original Hebrew. Owing to the multiplication of transcripts of the Greek text, numerous errors had crept in; and in the frequent controversies which arose between the [Judaeans] and the Greek or Hellenist (q.v.) Christians, the latter, in appealing to the Greek text, were often mortified by the discovery that it by no means represented faithfully the Hebrew original. In order to meet this evil, Origen undertook to provide a means of at least verifying the genuine Greek text, as well as of confronting it with the original. With this view he prepared what is known as his Tetrapla, or ‘fourfold’ version, which he afterwards extended into the hexapla. The Tetrapla contained, in four parallel columns, the Septuagint version, together with those of Aquila, Symmachus, and Theodotion. The hexapla contained, in addition, the Hebrew text, together with a transcript of that text in Greek characters. In some parts of the Old Testament there were superadded one, two, and even three other versions; so that in some parts the work contains nine columns, whence it is occasionally designated the Heneapla, or ‘ninefold.’ Of the origin of these latter versions little is known.

“The hexapla, however, was something more than a mere compilation of these versions. In the margin were given notes, chiefly explanatory, as, for instance, of the Hebrew names. But a still more important characteristic of the work were its restorations and corrections of the original, in which Origen was guided chiefly by the version of Theodotion. This, however, he did not effect by arbitrary alterations of the received text; but, while he retained the common text, by indicating with the help of certain signs (an asterisk for an addition, an obelisk for a retrenchment), the corrections which he sought to introduce. Both these texts, the common (koiné ekdosis)and that of the hexapla, are found combined in existing MSS. The hexapla, as a whole, has long been lost; several editions of those fragments of it which it has been possible to recover have been printed; by far the most complete of which is that of the celebrated Benedictine, Montfaucon (2 vols. fol., Paris, 1714), which retains, so far as it was preserved in the MSS., the arrangement and even the asterisks and obelisks of Origen. For a more detailed account, see the preface and Præliminaria of this learned work.” (Incidentally, these two large volumes are in PDF, and can be downloaded from my website: Volume 1, Volume 2)

On the Internet there are two large volumes, of 900 plus pages each, of fragments which have survived entitled Origenis Hexaplorum – Volume #s 1 & 2 in PDF which can be downloaded. Fortunately, there is notable evidence from useful resources to support this position concerning Gen. 4:1 thus: 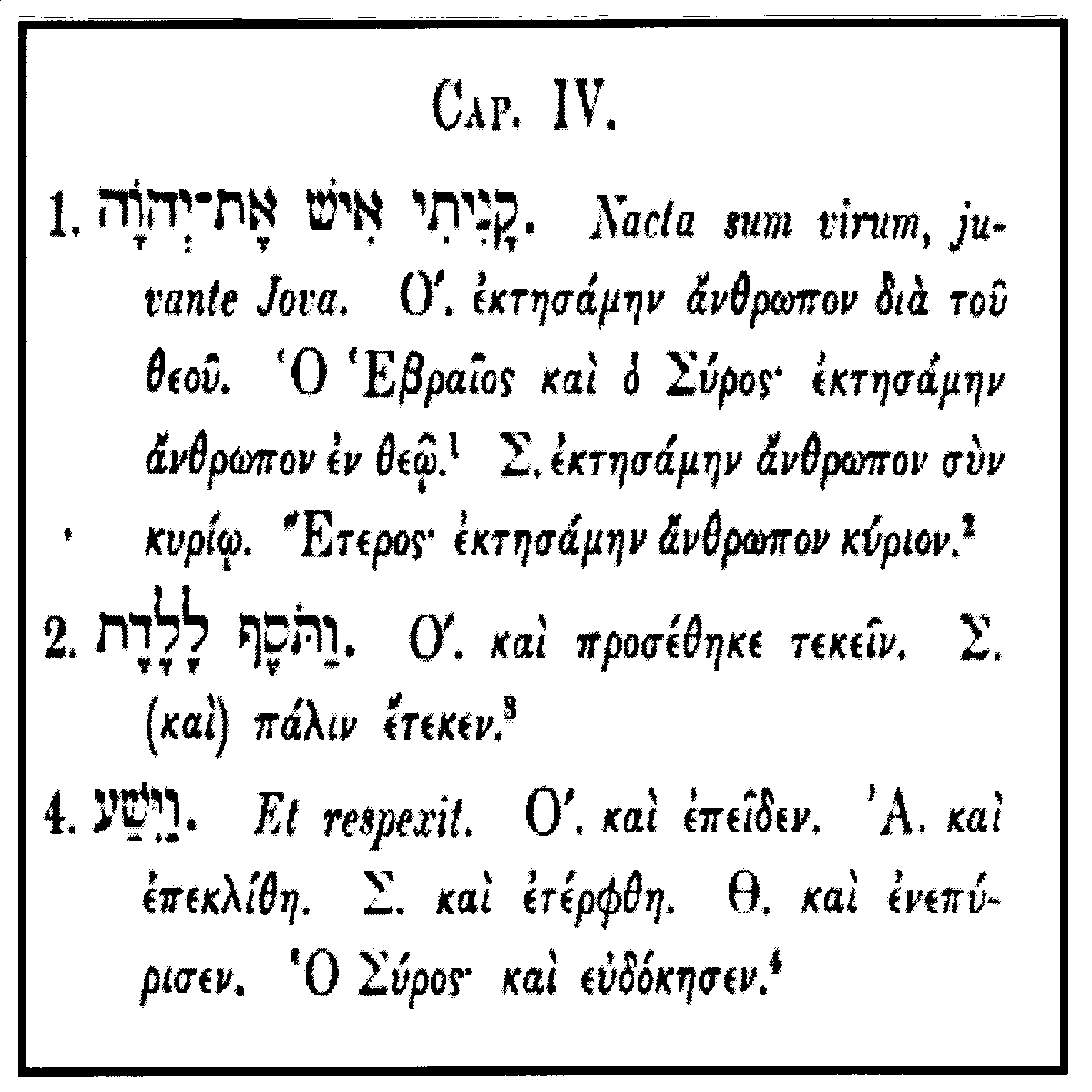 William Finck, in referring to my essay The Problem With Genesis 4:1, interprets this evidence thusly:

“The image in the above replica shows the various translations of part of the text of Genesis 4:1 into Greek. I am not yet ready to ascertain exactly why the entire first half of the verse is wanting, however the Hexapla did not survive to us completely. This is a volume of fragments, and it is written entirely in Latin, in which I am not proficient. The author reproduced both the Hebrew and Latin texts at the beginning of each verse, and then gave all of the readings from various Greek translations. Translating the various Greek interpretations of the Hebrew into English, the following readings are found (all translations are my own, possible variations are in brackets):

“First Greek reading: ‘I have acquired a man through [by] God’ (Definite article indicates ‘the God’, or a particular God.)

“Second Greek reading: ‘The Hebrew and Syriac: I have acquired a man with [by] a god.’ (No article would indicate no particular god, indefinite article added.)

“Fourth Greek reading: ‘I have acquired a man, a lord’ (the two nouns each being singular and in the accusative case with no prepositions are both the object of the verb, and therefore they refer to the same object, a man, a lord)

“While these readings do not directly support Clifton’s entire thesis presented in his paper, they do support theassertion that the text of Genesis 4:1 was rather problematic to the earliest translators of the Hebrew into Greek. For that reason, Clifton turned to the Aramaic Targums for an indication of how the Hebrew scribes of thatsame era (Page #1 of 2)understood the passage.” Thank you William for this revealing evidence.

There you have it; five more ancient fragments that are older than the manuscripts which our present Bibles are trans- lated from, and Adam is missing from all five!

If one will notice in the inserted portion of the Hexapla, the four letter Hebrew Tetragrammaton, including the vowel points (meaning Yahweh), is clearly visible immediately at the right side of #1. The second word is “man” (ish in Hebrew). The third word contains “get/getting” in the Hebrew. Of course, Hebrew reads from right to left. Therefore the rendering of “I got a man to help Yahweh” must be somewhat plausible. If this is close to what Eve was saying, the proverbial “serpent” must have passed himself off as the Almighty Yahweh Himself! Either that or the proverbial “serpent” may have claimed to be a superior being higher than Yahweh. Hence, the Greek renderings to English of “God”, “god”, and “Lord” or “lord” is typical of transliterating Hebrew to the English. Implications are: Adam IS NOT the father of Cain!

To understand the Aramaic Targums and the Hexapla, I will cite the 1980 Collier’s Encyclopedia, volume 4, under the general heading “BIBLE”, and subtitle “THE ANCIENT VERSIONS”, pp. 127-128 thusly (editing in brackets):

“The Aramaic Targums: “.... As the [Judaeans] adopted this language, they forgot their Hebrew and could understand less and less of the scriptures read to them in the [assemblies]. Eventually, a translator was needed to render the text into Aramaic as it was read out in Hebrew [Neh. 8:8]. The translator was known as a torgeman and his translation as a targum.

“In time the Aramaic targum became standardized, and finally it was written down. The earliest written targum we have is a manuscript of the Book of Job discovered among the Dead Sea Scrolls at Qumran. It was written about the first century B.C., but most of the other surviving targums were composed later, among the Aramaic-speaking [Judaeans] of Babylon. The Aramaic targums generally paraphrase rather than translate literally. They bring in much explanatory material and homily reflecting the thought of the time. Many Hebrew Bibles of today still carry the Aramaic targum side by side with the Hebrew text.

“The Septuagint, or Greek Version: The Greek version of the Old Testament began as a targum for [Judaeans] living in Greek-speaking areas of the Middle East. There were probably isolated Greek translations of the Hebrew scriptures in circulation before the third century B.C. According to tradition, dissatisfaction developed with the unofficial nature of these translations, and an official version was prepared by a committee of 70 or 72 eminent scholars for the library of King Ptolemy Philadelphus (285-247 B.C.) in Alexandria. This translation came to be known as the ‘Version of the Seventy’ – in Latin, the Septuagint. More probably, the Septuagint represents a revised collation of the informal oral [assembly] translations into the Greek.

“[Judaeans] at first welcomed the Septuagint. With the rise of Christianity, however, it became primarily associated with the Christian Church. The [Judaeans] repudiated it and prepared other Greek translations. Most of the quotations of the Old Testament that appear in the New Testament have been made from the Septuagint.

“In the third century A.D. the scholar Origen of Alexandria attempted to establish a uniform text of the Septuagint, drawing from a great variety of Greek versions, most of which had survived only in fragments. The result of Origen’s labor was the Hexapla, a monumental work of some 7,000 pages, which set forth in parallel columns the Hebrew text in Hebrew script, the same text written with Greek letters, the text of the Septuagint, and three of the later Judaean translations into Greek. The Hexapla was to provide the basis for many further translations into other languages.”

Many critics condemn the Aramaic Targum pseudo- Jonathan, on Genesis 4:1: “And Adam knew that his wife Eve had conceived from Sammael the Angel (of death) and she became pregnant and bore Cain. And he was like those on high and not like those below. And she said: ‘I have got a man from the angel of the LORD’.”

The Palestinian Targum to Genesis 4:1: “And Adam knew his wife Eve, who had desired the Angel; and she conceived, and bare Cain; and she said, I have acquired a man, the angel of the Lord ...”

In another Rabbinic work: Pirke de Rabbi Eliezer, “And she saw that his likeness was not of earthly beings, but of the heavenly beings, and she prophesied and said: I have gotten a man from the Lord.”

It would appear from those references that the problem with Genesis 4:1 is an omission of some of the words of the Hebrew text. I will now quote Genesis 4:1 from the King James Version and I will add the potentially needed words in italics from the Targum of Jonathan so it will make some sense:

“And Adam knew his wife Eve, who was pregnant by Sammael, and she conceived and bare Cain, and he was like the heavenly beings, and not like earthly beings, and she said, I have gotten a man from the angel of the Lord.”

It is a shame that the Aramaic Targums ended up in the hands of the Cain/Kenite-Canaanite-Edomite-jew’s, as the Targum paraphrases can be a valuable tool to comprehend the context of the original Hebrew manuscripts! The Aramaic Targums are Biblical, as per Neh. 8:8! Compounding the impact of their loss is the damage to Scripture which the Edomite-jews have done with their masorah (tradition). Until recently, Protestant translations of the Old Testament were made from a Masoretic text. (Page #2 of 2)

[Feel free to copy and distribute.]